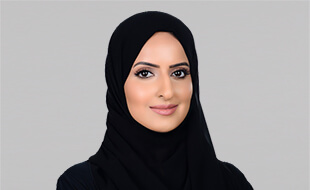 Aysha Al Hallami is currently a Research Specialist in the Fixed Income and Treasury Department at ADIA. Aysha Al Hallami was elected by ADIC to join the ADCB Board of Directors in April 2013.


*Independent (assessed as per Bank policies) 
*Independent (assessed as per Bank policies) Before his appointment as CSRO, Ahmed was the CEO, Energy at Mubadala Development Company where he oversaw the company's energy assets in addition to being a member of the Investment Committee.

Ahmed was also the Director General of the Abu Dhabi Technology Development Committee where his main responsibility was to support the development of Science, Technology and Innovation in Abu Dhabi, through various strategic initiatives as well as through the effective coordination between various government stakeholders.

Prior to his appointment to the Abu Dhabi Technology Development Committee, Ahmed was the CEO & Managing Director of the Abu Dhabi Ports Company, where he played an instrumental role in the development of Khalifa Port.

Ahmed has also served as the Deputy Director of the Infrastructure and Services unit at Mubadala Development Company, where he led a number of major projects and initiatives in the infrastructure and services sectors. Mohamed Ali Aldhaheri has a comprehensive background in the financial sector with more than 22 years of experience. He served in various senior roles within financial institutions; and currently holds the position of the Deputy CEO & Executive Director of the Accounting & Financial Services Department at Abu Dhabi Investment Council.

The primary responsibilities and functions of the Audit & Compliance Committee are to provide assistance to the Board to fulfil its duties to ensure and oversee: